The 1981 Edmonton Eskimos did something that no other team had done in the history of Canadian Football, and set the bar for all teams to be measured by: They won a 4th consecutive championship, never done before nor since. 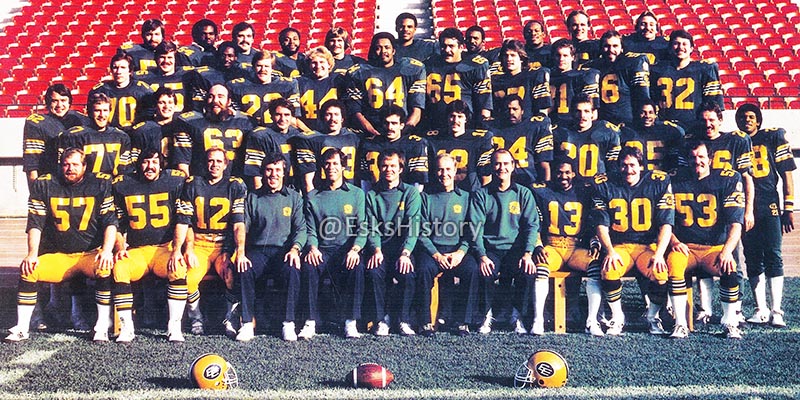 The team had been built over a decade, and they had dominated both the Western conference and in fact the league, finishing in first place 8 times in 9 years between 1973 and 1981, and were the Western representatives in the Grey Cup each year. The Dynasty-era really begun in 1977, with the hiring of head coach Hugh Campbell, who had been a star receiver for the rival Saskatchewan Roughriders in the 1960s.

Campbell took the team to the Grey Cup in his rookie season as coach, and after a heartbreaking loss to the Montreal Alouettes, tweaked the roster further by adding a few key pieces on his staff and roster to make the already-dangerous Eskimos into a juggernaut. Edmonton tied the club record for 3-consecutive Grey Cup wins in 1980, matching the 1954 through 1956 run by the "Glory Gang", featuring legends as Jackie Parker, Rollie Miles, Normie Kwong, and Johnny Bright. But this team wasn't content to just be "as good" as those other Dynasty teams. 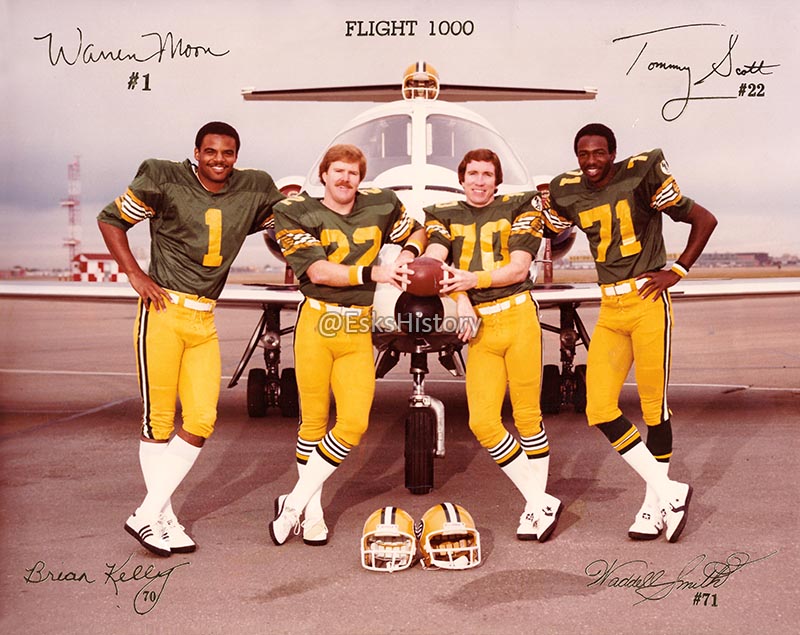 On Offense, the Eskimos had Warren Moon at Quarterback, who had taken over for 1974 Most Outstanding Player Tom Wilkinson. Moon had an arsenal of weapons at his disposal with slotback Tommy Scott, and wide receivers Waddell Smith, and 1979 Rookie of the Year Brian Kelly, who each would eclipse the 1000-yard receiving mark. Combined with Running backs Jim Germany and Neil Lumsden, the Eskimos were lethal both on the ground and through the air. 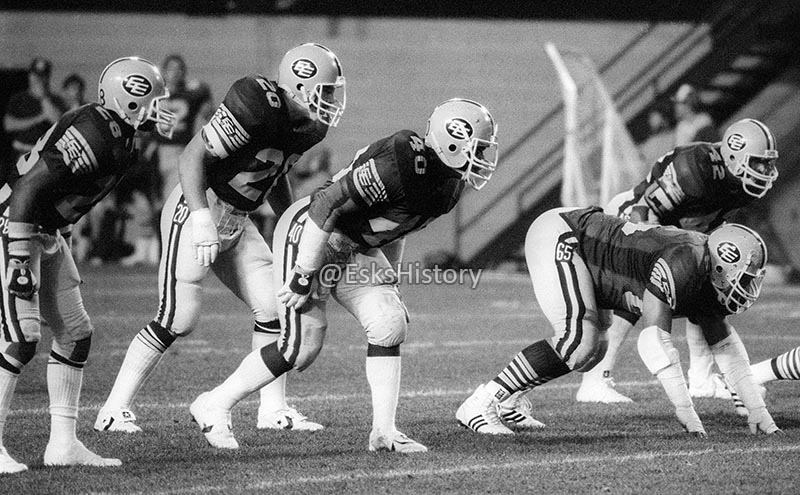 The devastating defense was built around Middle Linebacker Dan Kepley and Defensive Tackle Dave Fennell, who had both dominated the Most Outstanding Defensive Player award the previous 5 years. Making the quarterback assault even more dangerous was the 1980 addition of James "Quick" Parker, a tweener who split time between outside linebacker and Defensive End. Parker would retire as the all-time leader in Quarterback sacks, and lived up to his nickname.

The Eskimos had a secret weapon for the 1981 season; they had something to play for. Yes, it would be great to be the first ever team to win 4 consecutive Grey Cup titles, after the feat was done by the 1909-1911 University of Toronto and the 1922-1924 Queen's University teams, along with post-war teams like the 1945-1947 Toronto Argonauts and 1954-1956 "Glory Gang" Eskimos, but this was more personal. Teammate Don Warrington, a "lunchpail" type of running back/receiver that had been with the team for the majority of the 1970s, died tragically in an automobile accident shortly after the team won the Grey Cup in 1980. The Eskimos adorned their sleeve with a 21 patch in Warrington's honour, and they felt they had a 13th man on the field every play, with "Jeep", as he was known, in the huddle with them. 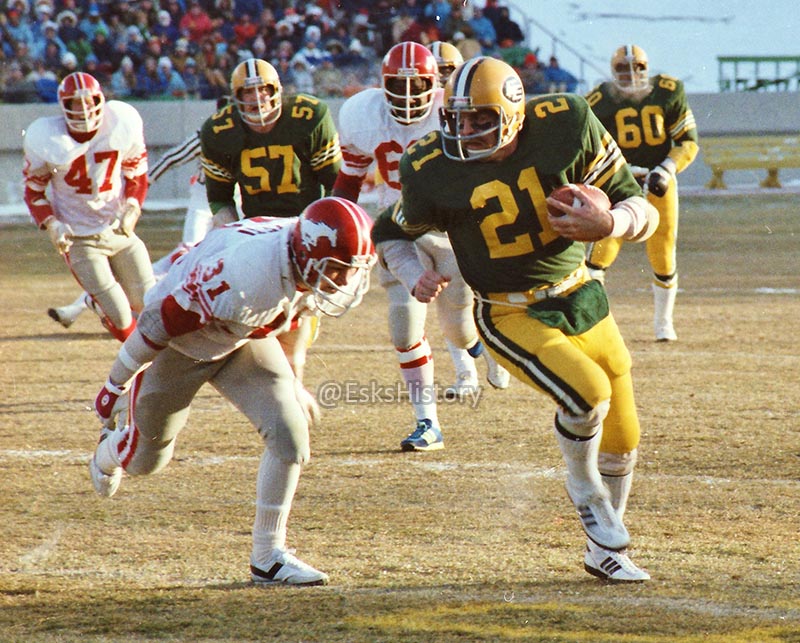 While the Eskimos dominated the league over their "Decade of Excellence", 1981 was special: They were the first team to have 29 points in a season, registering 14 wins, 1 tie, and a single loss. Their winning percentage of 90.6% is the highest achieved since the CFL was formed in 1958, and may never be eclipsed.

The offense under coordinator Cal Murphy scored an astonishing 575 points over the 16-game schedule, which set a CFL record, and Don Matthew's stingy defense recorded 38 interceptions and a staggering 72 quarterback sacks over the course of 1981. 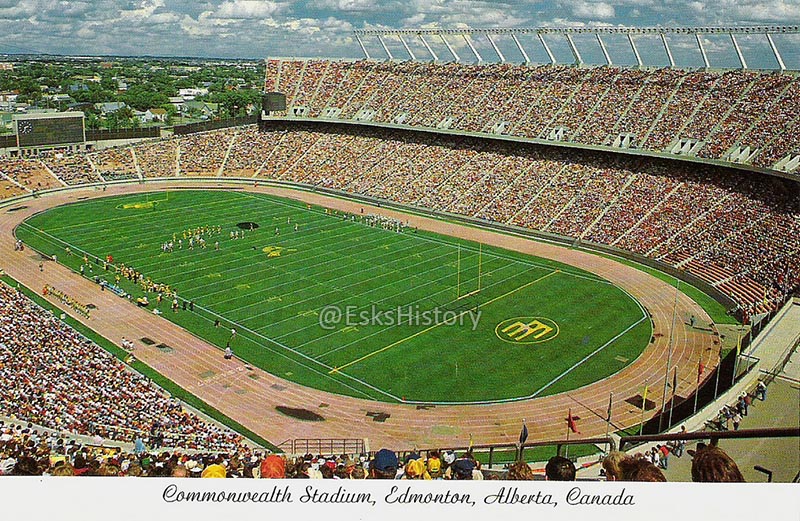 A packed Commonwealth Stadium cheers on the hometown Eskimos

The Eskimos home at Commonwealth Stadium was the hottest ticket in town, even during an era when Wayne Gretzky and the Oilers were dazzling crowds on the ice. The stands were packed with rabid fans cheering on the home team, and capacity was enlarged to nearly 60,000 seats the following year, and even then tickets were hard to come by. Edmonton rewarded the fans by winning every game at home that year, including the pre-season and post-season, on to the ultimate prize at the end of the year.

The 1981 Grey Cup was a true classic, though leading up to it, it seemed like it might be one of the most lopsided. The 14-1-1 Eskimos faced off against the 5-11 Ottawa Rough Riders, but the Black Riders were getting hot at the right time, and with future US Congressman Julius Caesar "J.C." Watts replacing quarterback Jordan Case part way through the season, they caught fire and upset the heavily-favoured Hamilton Tiger-Cats en route to the championship game. 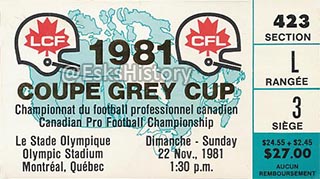 Fans at the 69th edition of the Grey Cup game witnessed history.

Ottawa stunned the Eskimos in the first half, building up a 20-0 lead over the Western champions, who perhaps took their opponent lightly leading up to the game. Coach Campbell inserted veteran pivot Tom Wilkinson into the game near the end of the half to settle the troops, and give Moon a different perspective on what the Ottawa defense was doing. It was a tale of two games, as the Eskimos roared back in the second half, scoring two touchdowns in the 3rd quarter to narrow the gap, and after holding Ottawa to a field goal, a second Moon touchdown with a successful two-point conversion toss to slotback and local product Marco Cyncar tied the game. Edmonton forced Ottawa to punt as the game wound down, and Moon marched his players down the field, and with 3 seconds left on the clock, all-star kicker Dave Cutler kicked a 27-yard field goal to complete the comeback, and seal the team's place in History.

The Eskimos would go on to win the Grey Cup the following year, to extend their winning streak to 5 consecutive Grey Cup championships, but there had already started to be changes to the club's roster, with Wilkinson and centre and long snapper Bob Howes retiring after the 1981 season, along with the squad seeing the final games in Green and Gold for long time defensive back Pete Lavorato and Canadian receiver Stu Lang. Defensive End Ron Estay was released after a single game in the 1982 season, and the team sputtered in the first half of the season with a 3-5 record at the midway mark, a far cry from the league domination of the 1981 season.

The Eskimos have had some impressive teams across the years, and two separate dynasties in Canadian Football, but for one shining moment in 1981, they were the class of the league, and perhaps the greatest team ever assembled in Canadian Football. With their multitude of fans cheering their beloved team on, can it be that this team could rise out of football history, to prove again to the world how they are the Greatest team to ever play Canadian Football? 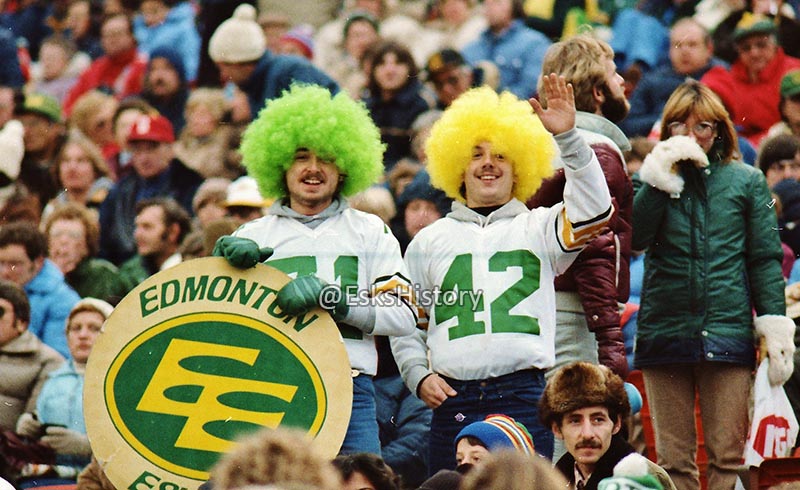 Edmonton Eskimos fans cheering on the team no matter the weather. Photo courtesy of Bob Peterson. 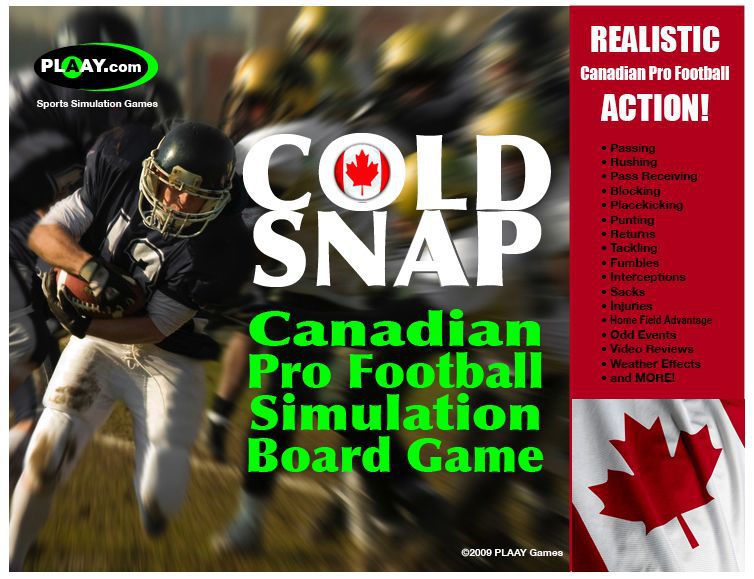 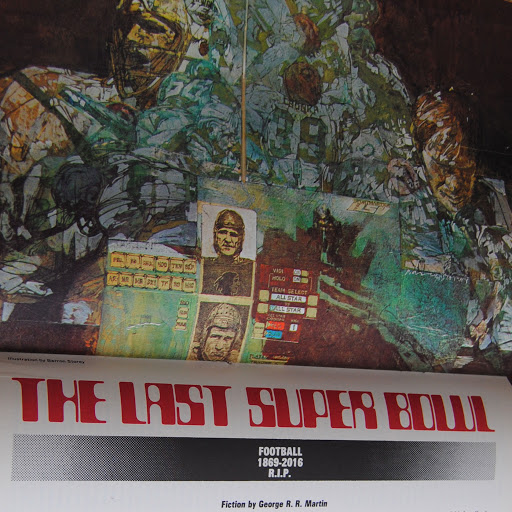